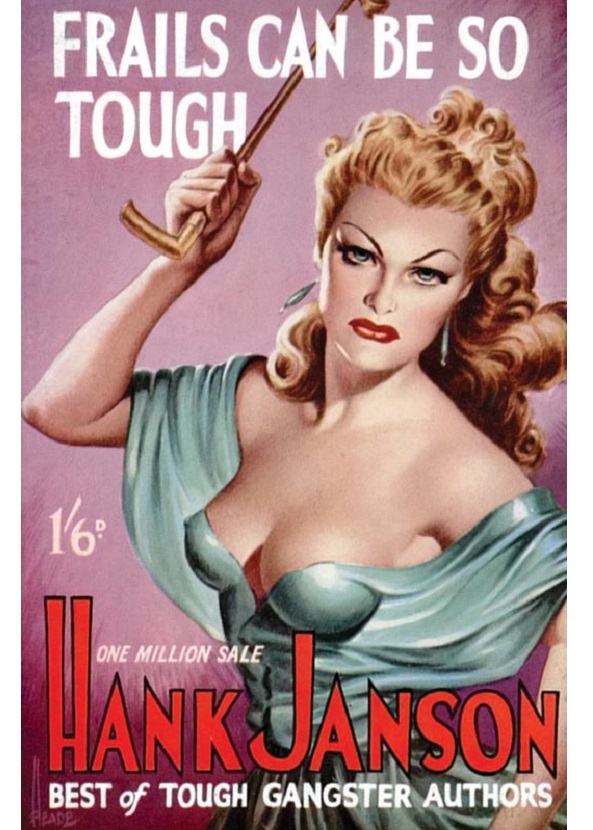 Frails Can Be So Tough (Hank Janson # 8)

In the 1940s and 1950s, the Hank Janson novels, with their sleazy covers and no-holds-barred tales, were a guilty pleasure for millions of readers, but incurred the wrath of the establishment! Telos Publishing in delighted to bring selected examples back into print to be enjoyed by long-time fans and new readers alike.

In their time, the Hank Janson novels, with their sleazy covers and no-holds-barred tales, were a guilty pleasure for millions of readers, but incurred the wrath of the establishment!

Frails Can Be So Tough tells the story of Lee Shelton, a man with a tragic past and a deeply troubled present. Framed for a murder he didn’t commit, forced to kidnap and chain up a beautiful passer-by – who turns out to be a millionairess – in order to avoid capture, and with a broken hypodermic needle buried in his festering arm, he finds events conspiring against him. Will he be able to get out from under all these problems, or is a lengthy prison sentence – or even death – what fate has in store for him?

This intriguing thriller is the latest in Telos Publishing’s acclaimed Hank Janson reissue series, and reinstates Reginald Heade’s striking, previously-unpublished original artwork cover, which was censored when the book first appeared in 1951 in an attempt to avoid prosecution for obscenity.

Hank Janson was the pseudonym adopted by author Stephen D Frances (pictured) when he created the Janson character and wrote the first of the books, a novella entitled When Dames Get Tough, in 1946.

The name seemed to him to have the right ‘hardboiled American’ ring to it – in fact, ‘Hank’ was chosen as the forename mainly because it rhymed with ‘Yank’!

Frances went on to write all of the ‘classic era’ (1946-1953) Hank Janson books (bar perhaps one or two, over which experts disagree), and many of the later ones too, although almost all of the post-1959 novels (the last was published in 1971) were the work of different authors and of distinctly inferior quality.

Frances was born in 1917 in Lambeth, South London, and grew up in conditions of near poverty. A man of left-wing political views and great principle, he was a conscientious objector during World War II. After trying his hand at a number of different jobs, and writing a few newspaper articles, he founded a small publishing company, Pendulum Publications, in 1944.

It was under the Pendulum Publications banner that When Dames Get Tough, and its follow-up Scarred Faces, appeared. The next few Janson novels were published by a company under Frances’s own name. Then he entered into a deal with publisher Reginald Carter, and the remainder of the ‘classic era’ books – subdivided into five regular series and a number of ‘specials’ – were published by a succession of Carter’s companies, starting with New Fiction Press, and distributed by Gaywood, a company owned by another of Frances’s associates, Julius Reiter. (This has led to them being generally referred to amongst collectors as ‘the Gaywood books’.) In 1952, Frances actually sold all the rights in Hank Janson to Carter.

The huge success of the Hank Janson books gave Frances a comfortable lifestyle and made him something of a minor celebrity – although on the few occasions when he was interviewed, he insisted on adopting the Janson persona and appearing ‘undercover’ in a mask and a hat (to disguise the fact that he in no way resembled the Janson image!).

In the early 1950’s Frances moved to Spain, a country for which he had a great affection. This was perhaps just as well, as it meant that he escaped the main impact of the prosecutions brought against the Janson books at that time under the Obscene Publications Act, which resulted in both Carter and Reiter being sent to jail. When he later returned to England, Frances was acquitted of all the charges against him after claiming that he did not write the Janson books – which was strictly true, as he dictated them into a dictaphone and they were then transcribed by a typist!

Frances continued writing into the 1970’s, although the last Hank Janson novel that can be reliably attributed to him was published in 1963. He died in 1989, at his home in Spain, of emphysema.

The following is the fictional biography of Hank Janson that was printed in a number of the “classic era” novels:

Hank Janson tells us that he was born in England during the Great War. There is very little of interest about his early school life except, perhaps, when at the age of fifteen, in order to win a wager with his school friends, he borrowed his brother’s motor bike, which he had never previously driven, and entered himself for a cross country endurance race. He smashed his brother’s bike and wore his arm in a sling for months afterwards.

When he was nineteen, he stowed away on a fishing trawler and started on an adventure which was to last until 1945. Not once during the intervening years did he come back to England. He has dived for pearls in the Pacific, spent two years in the Arctic with a whaling fleet and worked his way through most of the American States. He obtained American nationality some years ago, worked in New York as a truck driver, news reporter and as assistant to a private detective agency. During the war he served in Burma.

Two years ago he returned to England and is now living in Surrey with his wife and children, spending his time gardening and writing about his personal experiences in a fictional form.

His life has been rich, exciting and dangerous – and almost, it may be said, as true to life as his stories.