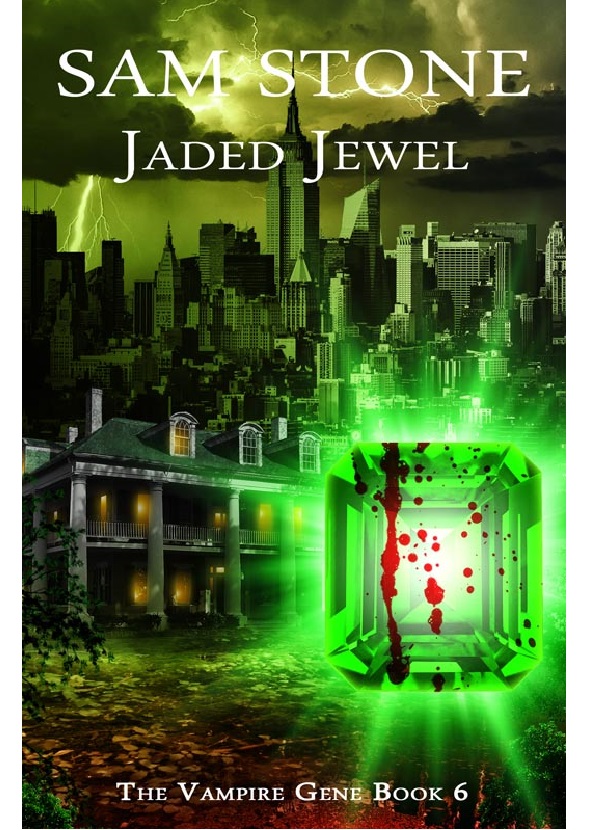 Jaded Jewel is a powerful novel of love, loss and obsession, of power and of the struggle to survive. Sam Stone makes a triumphant return to the hypnotic and compelling world of the Vampire Gene.

We always aim to ensure that books are sent out as quickly as possible, but sometimes it can take a little longer than usual, so please do not query non-receipt until 28 days after the date the order was placed, or after the date of publication, whichever is the later.

Dreams and music touch people’s lives, and are the most powerful allure for those who can use them. Something hidden is sending a siren song out into the world, seeking help, and enticing those who can hear with tales of Jewel, a beautiful young woman, and her struggles on a 19th Century plantation in America’s deep South.

Young lovers Ffion and Geraint find themselves drawn across the sea from North Wales to Nevada and then to New York … and in that city, Mariele Cole also hears the siren song and is compelled to speed up the demolition of an old building to make way for a new high-rise … as something is buried beneath.

Meanwhile in Stockholm, John Noble and Father Declan use the resources of the Knights Templar to search for a missing vampire family and their former colleague Anthony.

Jaded Jewel is a powerful novel of love, loss and obsession, of power and of the struggle to survive. Sam Stone makes a triumphant return to the hypnotic and compelling world of the Vampire Gene.

‘Stone is an exciting genre voice, infusing her fast-paced action with a thoughtfulness that can too often be forgotten.’ Assorted Buffery

Sam Stone began her professional writing career in 2007 when her first novel won the Silver Award for Best Novel with ForeWord Magazine Book of the Year Awards. Since then she has gone on to write several novels, three novellas and many short stories. She was the first woman in 31 years to win the British Fantasy Society Award for Best Novel. She also won the award for Best Short Fiction in the same year (2011).

Stone loves all genus fiction and enjoys mixing horror (her first passion) with a variety of different genres including science fiction, fantasy and steampunk.

Stone lives in Lincolnshire with her husband David and her two cats Freya and Shadow.

Her works can be found in paperback, audio and e-book.

‘Sam Stone without doubt is a mistress of the grisly and the glutinous. She is one of the few horror writers who makes you feel when you have finished her stories that you need to wash your hands. Twice. I believe that we can look forward to seeing Sam Stone develop into a major influence in the realm of blood and shadows and things that wake you up, wide-eyed, in the middle of the night.’ – Graham Masterton

‘A deceptively readable date with darkness watch your step! This book is lit for the much more discerning chick (and cock) who likes to walk in the shadows. Relax with it, but be prepared for sudden jewels and little masterpieces and the rug to be pulled from under your feet.’ – Tanith Lee on Killing Kiss

‘I was floored by Sam’s work. Really flat-out delighted to see such a level of style combined with narrative drive. I suppose one could use those terms in an overly technical sense, but Sam is at a level that simply shines. Soaking in her story even while seeing her powerful ability to make me feel and see what the narrator is experiencing – she’s not only got a gift, she clearly knows how to employ it to powerful effect.’ – Gard Goldsmith on Killing Kiss

‘With all the style and charisma of Anne Rice, but less indulgence and crazy, Futile Flame is a sensual, deadly tale of immortals, sins and the unknown wrapped up in a vivid take on the past. Rich, enticing and utterly charming, Stone’s vampires are ambrosia to horror fans hungry for the good old monstrous vampires who look, walk and sound like us, but hold our deaths in their gaze.’ Michele Lee – Booklove

‘Enticing, shocking and delightful … A fast-moving story that’s spell-binding, as thrilling as it is intelligent and thought-provoking … Sam Stone writes with stylish panache.’ – Simon Clark on Demon Dance

‘Sam Stone has done it again, her immersion into the vampire world is so extraordinarily well-crafted that I am wondering if she is really Lilly, the protagonist vampire with a heart. And Lilly is more than a vampire, she has learnt witchcraft and – rare in vampire literature – can manipulate ley lines, using them as a power. Unusual too in that this vampiric feast travels the corridors of time, quite literally and in both directions … If Futile Flame was a flambé of vampiric lust, Demon Dance is its force majeure.’ – Geoff Nelder

Check out the Telos advert in the new DWM!

And get orders in quickly as some titles on sale are now very low in supply ...
... See MoreSee Less