The Unofficial and Unauthorised Guide to Doctor Who

Everything you ever wanted to know about the classic era of the cult BBC television series Doctor Who (1963-1996) is contained in the two volume set The Television Companion. Volume 2 covers the stories of Doctors four to eight, portrayed by Tom Baker, Peter Davison, Colin Baker, Sylvester McCoy and Paul McGann.

The essential companion for every trip you will ever take into the TV universe of classic Doctor Who.

Category: Out of Print: Doctor Who

Everything you ever wanted to know about the classic era of the cult BBC television series Doctor Who (1963-1996) is contained in the two-volume set The Television Companion.

On its first publication in 1998 by BBC Books, The Television Companion was hailed as possibly the best guide ever to the BBC’s cult science fiction show Doctor Who. Now Telos Publishing re-issues its own edition of the book in a revised and updated two-volume version, which remains the definitive guide to the television worlds and adventures of the Doctor and his companions.

Every story from 1963 to 1996 is covered in depth in all aspects of production, including plot details, cast and crew lists, episode endings, transmission dates, memorable quotes and popular myths. In addition there is a comprehensive analysis of every adventure, utilising reviews both contemporary and retrospective from a wide variety of sources.

This is the essential companion for every trip you will ever take into the TV universe of classic Doctor Who.

‘Another superior effort from what I consider to be the finest Doctor Who historians around. It is quite a hefty and involved read, and contains (almost) everything you’d want to know about the best SF Tv series ever.’ Reviewer on Amazon.co.uk.

‘If you’re looking for a Doctor Who episode guide, then you can stop looking as this is by far the best book you can buy about the television series.’ Sean Brady on Amazon.co.uk

‘What is most memorable about The Television Companion is the fact that every story is given a balanced analysis – it’s not decreed that “Timelash” is bad, for example, rather the authors draw upon a wide variety of opposing reviews spanning the years to present a genuinely interesting study of every story – which is altogether far more interesting than cut-and-dried opinions. The Television Companion is indispensable to all fans of the television series, especially because of the detail in which the Hartnell and Troughton stories are studied. The emphasis is no more in-depth than any other era of the show, but seeing as many of their stories no longer exist, it’s highly rewarding and an admirable asset to a potentially video-biased read.’ Brad Schmidt in TSV (#56, October 1998)

BBC Books edition (out of print): 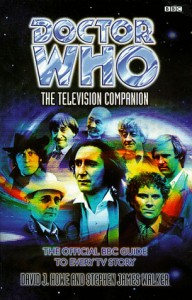 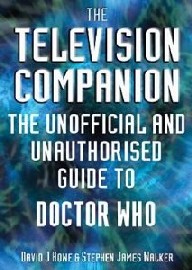 David J Howe has been involved with Doctor Who research and writing for over 30 years. He has been consultant to a large number of publishers and manufacturers for their Doctor Who lines, and is author or co-author of over 30 factual titles associated with the show. He also has one of the largest collections of Doctor Who merchandise in the world. David was contributing editor to Starburst magazine for 17 years from 1984-2001. From 1994 he was book reviews editor for Shivers magazine until it ceased publication in 2008. In addition he has written articles, interviews and reviews for a wide number of publications, including Fear, Dreamwatch, Infinity, Stage and Television Today, The Dark Side, Doctor Who Magazine, the Guardian, Film Review, SFX, Sci-Fi Entertainment, Collectors’ Gazette, Deathray and the Oxford Dictionary of National Biography.

He edited the bi-monthly newsletter of the British Fantasy Society from 1992 to 1995, and also edited and published several books for them, including the British and World Fantasy Award shortlisted Manitou Man, a limited edition hardback and paperback collection of short fiction by horror author Graham Masterton. He also edited the BFS’s fortieth anniversary anthology, Full Fathom Forty, published in September 2011.

He wrote the book Reflections: The Fantasy Art of Stephen Bradbury for Dragon’s World Publishers and has contributed short fiction to Peeping Tom, Dark Asylum, Decalog, Dark Horizons, Kimota, Perfect Timing, Perfect Timing II, Missing Pieces, Shrouded by Darkness and Murky Depths, and factual articles to James Herbert: By Horror Haunted and The Radio Times Guide to Science Fiction. He wrote the screenplay for Daemos Rising, a film released on DVD by Reeltime Pictures in 2004.

He wrote about Doctor Who merchandise for Doctor Who Insider magazine, and contributed liner notes for AudioGO’s range of Doctor Who novelisation CDs.

He is currently Editorial Director of Telos Publishing Ltd, a UK based independent press specialising in horror/science fiction novellas, crime novels, and guides to a variety of film and TV shows. In 2006 the company won the World Fantasy Award for their publishing work, and in 2010 celebrated their tenth anniversary while also receiving the British Fantasy Award for Best Small Press.

Stephen James Walker became hooked on Doctor Who as a young boy, right from its debut season in 1963/64, and has been a fan ever since. He first got involved in the series’ fandom in the early 1970s, when he became a member of the original Doctor Who Fan Club (DWFC). He joined the Doctor Who Appreciation Society (DWAS) immediately on its formation in May 1976, and was an attendee and steward at the first ever Doctor Who convention in August 1977. He soon began to contribute articles to fanzines, and in the 1980s was editor of the seminal reference work Doctor Who – An Adventure in Space and Time and its sister publication The Data-File Project. He also became a frequent writer for the official Doctor Who Magazine. Between 1987 and 1993 he was co-editor and publisher, with David J Howe and Mark Stammers, of the leading Doctor Who fanzine The Frame. Since that time, he has gone on to write, co-write and edit numerous Doctor Who articles and books – including Doctor Who: The Sixties, Doctor Who: The Seventies, Doctor Who: The Eighties, The Doctor Who Yearbook 1996, The Handbook (originally published in seven separate volumes) and The Television Companion – and he is now widely acknowledged as one of the foremost chroniclers of the series’ history. He was the initiator and, for the first two volumes, co-editor of Virgin Publishing’s Decalog books – the first ever Doctor Who short story anthology range. More recently, for Telos Publishing he has edited the three-volume Talkback series of Doctor Who interview books and written a range of annual guide books to both 21st Century Doctor Who and Torchwood. He has a BSc (Hons) degree in Applied Physics from University College London, and his many other interests include cult TV, film noir, vintage crime fiction, Laurel and Hardy and an eclectic mix of soul, jazz, R&B and other popular music. Between July 1983 and March 2005 he acted as an adviser to successive Governments, latterly at senior assistant director level, responsible for policy on a range of issues relating mainly to individual employment rights. His working time is now taken up by his writing projects and by his role as co-owner and director of Telos Publishing. He lives in Kent with his wife and family.

The Television Companion Vols 1+2 (“Doctor Who”)