Welcome to another newsletter from Telos Publishing. After a run of good weather, it’s a shame that the rains seem to have come in for this extended Bank Holiday Weekend … maybe the weather will improve though, and if you have any parties organised to celebrate the Jubilee, then we hope you have an amazing time!
There’s a couple of items to mention this time around. 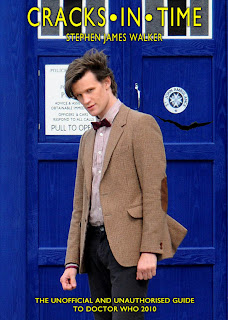 CRACKS IN TIME: THE UNOFFICIAL AND UNAUTHORISED GUIDE TO DOCTOR WHO 2010
By STEPHEN JAMES WALKER

Our printers have had some challenges in recent weeks with broken parts and lack of paper stock … this has resulted in the copies of Telos’ new guide to Series 5 of Doctor Who (the first Matt Smith season) running late in getting to our distributors (and thus to Amazon, Book Depository and other stores both bricks and mortar and virtual). We have been promised copies week commencing 11th June now, and we apologise to anyone who ordered via those routes for the delay.

We do have paperback copies of the book available direct from Telos, however, and we also have copies of the gorgeous Hardback edition in stock now. This is limited to 100 copies only, and they are selling fast, so if you want to get your hands on a copy, then please order soon. As always, we will do our best to match a previous limited edition number for customers, but this only applies for sure if you pre-order.

To order from Telos Publishing: http://www.telos.me.uk/category.php?id=6#129

The two events that author Stephen James Walker attended (at Peterborough and at London’s Xcel centre) were great fun, and we hope that everyone who attended had as good a time as we did.

FAMILY OF ANGELS and ANGELS IN ARMS
By MIKE RIPLEY

We’re pleased to announce that the Kindle editions of these two titles are now available from Amazon. All of Mike’s Telos titles are up on Digital, so if you fancy some comic crime for your electronic reading device of choice, then please have a look.

The first of our new series of guides to the Eurovision Song Contest, covering the 1950s and the 1960s, has been delayed slightly, and we’re now expecting copies by the end of June. Author Gordon Roxburgh has done an incredible job chronicling the early days of the contest, and we hope that the book will be well received by everyone.

We are just putting the final touches to the book, which will include an 8 page full colour section of rare single covers, songsheets and other curios, and as soon as we get copies in stock, we’ll be sending them out to everyone who has preordered.

Our guide to the classic series of Battlestar Galactica and Galactica 1980 is on track for the end of this month release. The authors are working their way through the proofs at present and as soon as we get them back, then it will be off to print. With an introduction from Richard Hatch, who played Apollo in the original series, By Your Command is a superb and detailed look at the series, from the same authors of Telos’ acclaimed guides to Blake’s 7 (Liberation) and The Prisoner (Fall Out): Alan Stevens and Fiona Moore.

Next time we should have news of a few more titles for the latter part of this year, plus maybe some news of what Telos has in store for 2013 …

If you’re on Facebook and fancy ‘Liking’ Telos publishing, then we can be found here: http://www.facebook.com/pages/Telos-Publishing/22343509719

Please join and let us know what you think of the books, chat about the covers … anything that takes your fancy really. Often new covers are premiered on the Facebook group, and news and details of reviews and other items of interest across the Web are also shared there.

Please let us know what you think of this Newsletter … what would you like to see included?

David, Steve and the Telos Team.