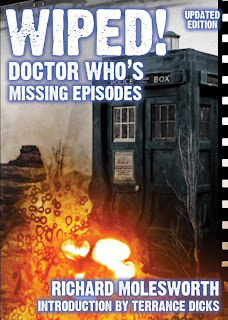 We received finished copies from the printers of the paperback and hardback editions of WIPED today – it looks stunning!

As we are heavily involved in the SciFi Weekender this coming weekend, we won’t be able to despatch the paperback copies until after that, early next week.
The Hardback copies need to be signed by the author, and so won’t be despatched until that has happened.
I’ll try and post here to keep people updated as to the status over the next week or so regarding the book.
http://www.telos.me.uk/category.php?id=6#141
05/03/13 – Update on the status of WIPED. We have just finished packing the paperback orders, which should go off to the post office tomorrow if all goes well (Sam has been sick with Con Crud, so we’re hoping she’s up to taking them … if not, then they will go as soon as we can get them there). On the Hardback, Richard should be signing these Tuesday next week, so they will be despatched thereafter.
09/03/13 – Update on WIPED. We have sent out all the pre-orders of the paperback now. And our distributors should now (or will on Monday) have copies of the paperback as well – so Amazon orders should be filled shortly after. Richard is currently planning to visit to sign the hardbacks on Tuesday next week, and these copies will therefore be sent out as soon as that has happened.

13/03/13 – Update on WIPED – Had a lovely time yesterday with Richard Molesworth, signing all the hardbacks. So these will hopefully be packed up and despatched today, along with a handful of paperback orders from the last few days.