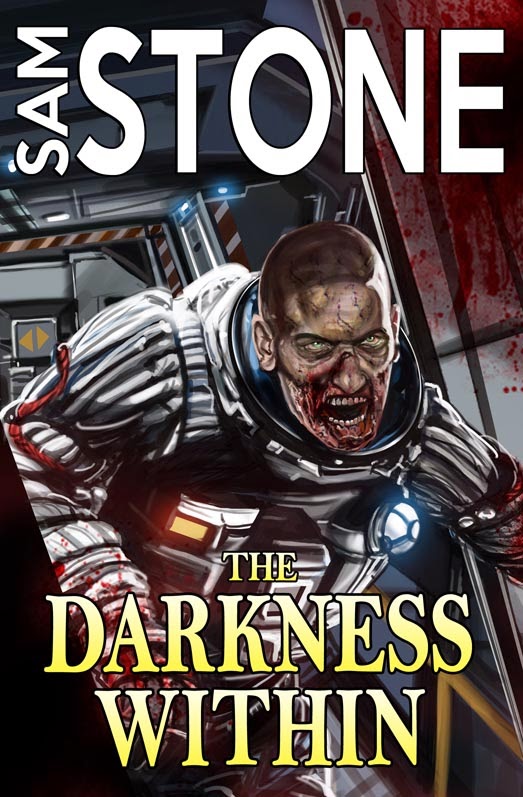 Stephen James Walker, Editorial Director of Telos Publishing in London, has acquired world rights in a new horror/dark fantasy novel bySam Stone, and in a new science fiction/fantasy trilogy from the same author.

The short novel, entitled The Darkness Within, was formerly published by AudioGo in both audio and Kindle editions, but when that company went into liquidation at the end of last year, the book rights were snapped up by Telos. The paperback and Kindle editions from Telos will feature a new foreword by Stone, and will also reinstate some of the material which was considered too strong for the audio edition. The title is currently available for pre-order and will be shipping soon.

‘The Darkness Within is my first dabble with science fiction. I was really proud of how it turned out and was disappointed when AudioGo went into liquidation almost on the eve of its first publication. There’s always a silver lining, however, and I am delighted that Telos has taken it on, and will bring my tale of Zombies in Space to a wider audience. This is my preferred edition as some of the sexual elements and more gruesome scenes had to be toned back for the audio version. It’s great that the book can now be made available in the form I intended.’

Telos have also picked up World rights in a new trilogy of novels by Stone, collectively called The Jinx Chronicles. ‘With the Jinx books,’ explains Stone, ‘I wanted to explore how humanity might really deal with an apocalypse. As with much of the work of Clive Barker, the series explores who the real monsters are. I had great fun making my alien invaders as sexy as possible, and my heroine, Jas, is hopefully intelligent, sassy and kick-ass enough to stand up to them. I describe the series as Lord of the Ringsmeets Independence Day via Men Are From Mars, Woman Are From Venus… it’s a great cross genre fantasy/science fiction romp, which also includes a healthy dose of horror!’

Walker commented: ‘I’m delighted that Telos has secured the opportunity to publish this exciting new trilogy of books by Sam Stone. I’m sure it will be very warmly received by her loyal and ever-growing group of fans, as well as attracting many new readers to her work. Each new instalment in the trilogy will be awaited with baited breath!’

Jinx Town, the first in The Jinx Chronicles will be published later in 2014 by Telos.

Sam Stone’s first novel, Killing Kiss, won the silver award for Best Horror Novel in ForeWordMagazine’s Book of the Year competition, and her subsequent novels and short stories have gained her much acclaim, including winning the British Fantasy Award. She holds an MA in Creative Writing and is a noted public speaker and lecturer. Sam’s website is atwww.sam-stone.com, and Telos Publishing is at www.telos.co.uk.

Unboxing video of the first, early copies to arrive of THE WHO ADVENTURES, HANK JANSON UNDER COVER and THE ART OF LOUIS SHABNER, all of which arrived today!Books are expected around December 2021 ... so get your pre-orders in now, at pre-order prices, from www.telos.co.uk!Also available in the USA from Bud's Art Books - www.budsartbooks.com/product-category/coming-soon/coming-soon_artists-illustration/ ... See MoreSee Less